It was still raining lightly when we all went to bed last night, but overnight it got much heavier. The first surprise when arriving on site this morning was that the partially finished roof on the larger house had been roughly completed, so that the whole house was covered. It turned out that Jacob (the local pastor who oversees the projects that Grassroots supports in Romania) had worked on the house for two hours overnight to keep it as dry as possible. Unfortunately there was nothing he could do for the smaller house, and by morning large pools of water had formed on top of the polystyrene ceiling with holes in the ceiling below where it had been dripping through.

We all huddled inside the larger (and dryer!) house for a morning briefing and waited for the rain to subside enough so we could start working. One team set off refitting the corrugated bitchumen sheets on the roof that had been laid roughly overnight, and I joined a group working on roof structure for the smaller house. Finally, a small team set about digging a very large hole that will house a septic tank and soakaway for the toilet in the larger house.

We hadn’t been working long when the rain became much heavier, which wasn’t ideal when we were working on an uncovered roof with power tools! It took us about two minutes to cover everything over, climb down from the roof and get inside, by which time we were completely soaked through! At this point, Richard started punching small holes through the completed ceiling to try and drain the standing water from the top of the house. This, in turn, meant that all the water dripped through and started filling the inside of the house, so he had to create a hole through the bottom of the wall to drain that away. As soon as the rain subsided we continued working on the roof but the conditions made it very difficult. It goes without saying that an alfresco lunch wouldn’t have been so pleasant today so we squashed inside to eat.

In the afternoon work on the two roofs continued in the rain. Normally we would have used corrugated bitchumen sheets for both houses, but some traditional roof tiles had been donated to the project for use on the smaller house. Therefore a few of us started the big job of transferring the tiles from one house (where they had been delivered) to the other – wheelbarrows with flat tyres and very muddy ground don’t go together too well!

Five of us left the site slightly early this afternoon to visit the family living in the house we built last year. It was great to see them again, and they seem to be doing much better than there were when we last saw them. The house has been painted since we left and they’ve turned it into a nice home, though it currently has nine people living in it! Amazingly their old house is still standing – apparently because they can’t afford to have the electricity meter moved out of it and into the new house. Nick presented them with a framed photo that we took of the whole building team with the family just before we left Romania this time last year.

After that, we drove to a church where we met the rest of the group for a 6pm service. Normally we would try to go to a church in the village where we are doing the house build, but it seems there isn’t anywhere suitable at the moment, so instead we returned to Magarus – the town where Olivio lives, whose house was built by a Grassroots team three years ago. The pastor, Augustine, has also helped out with a couple of the house builds so we know him quite well. Although we couldn’t understand most of the service, it is a very vibrant church with lots of young people heavily involved. We were very warmly welcomed and they arranged for a translator so that Sharon and Stuart could tell everyone a bit about our work here.

The main topic of conversation over dinner tonight was about the weather! Although different websites are giving various forecasts, they all seem to agree that there will be much heavier rain and storms tomorrow. Hopefully they’re all wrong! 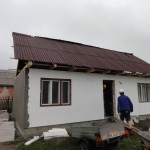 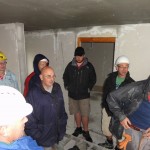 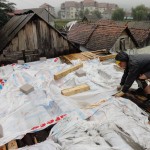 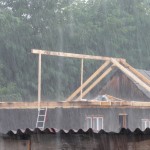 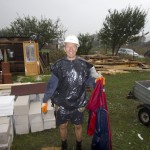 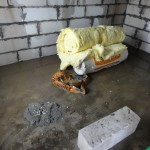 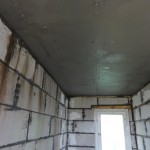 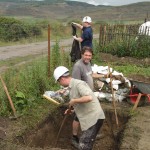 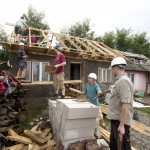 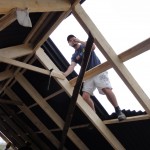 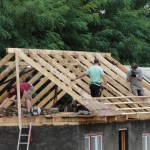 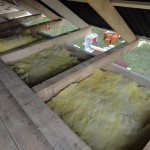 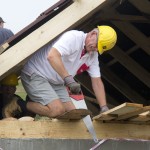 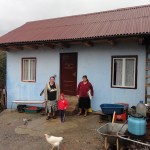 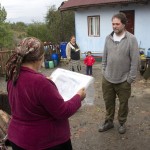