At our briefing this morning, Richard felt that today might be a slightly easier day for the team. The main target was to get at least one of the roofs up, which would occupy a group of 4-5 people. Although there were other jobs that needed doing, a local team was also due at the site today to work of the internal ceilings and the wiring for the electrics. This is where logistically the build gets more complicated, with lots of people involved and a mix of very different British and Romanian techniques.

My first job was to add a half height course of blocks to the internal walls in each house, which would raise them just above the wall plate and allow us to bind them into the joists for extra strength. Having cut all of the blocks for the smaller house, I had just started laying them when the Romanian team arrived to start work on the ceiling. Adding the polystyrene insulation for the ceiling at this stage made it difficult to lay the blocks that I was working on, so we had to come back later and find an alternative solution for bracing the walls. Normally we would complete the walls and roof before starting on the internal ceilings – working on the project out of order certainly makes it more challenging. However, with many local volunteers giving up their time to help, we do our best to adjust the schedule to work around them, especially as we are guests in their country.

Unable to work inside the houses, one team worked on the roof of the larger house while the rest of us started working on the exterior walls of the smaller house. The two houses will have slightly different finishes on the walls both internally and externally. The larger house will have plasterboard inside and polystyrene outside with a thin layer of tile adhesive to provide the final finish. Meanwhile the smaller house will be rendered inside and out with sand and cement. It takes a lot of muck to render an entire wall so it took us most of the rest of the day to mix and apply it. A good percentage of that time was spent at the back of the house where there is a very steep bank that can only really be described as a rubbish heap. Sitting in it to get access to the bottom of the walls was not the most pleasant experience we’ve had so far!

The other disadvantage of building the house in the wrong order is that the interior is not protected from the weather until the roof is on. The interior work completed this morning meant that we couldn’t walk on top of the smaller house or start the roof work in case the vibrations damaged the ceiling. Unfortunately, despite the good weather we’ve had so far, the rain started falling by early evening. By this time the larger house had a partially completed roof but the smaller house had nothing. We did our best to cover it with some plastic sheeting and wooden boards, but heavy rain tonight could potentially leak through and damage the interior.

Back at the hotel there was time for dinner and a couple of rounds of Monopoly Deal before bed. Most of us have found it a difficult day, not least because the tiredness, aches and pains are definitely setting in, but progress has still been really good. Hopefully it won’t rain too much tonight! 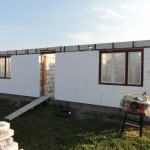 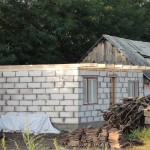 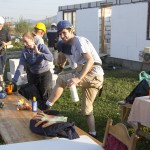 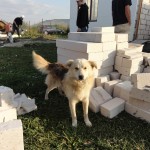 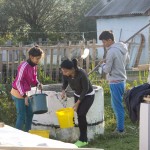 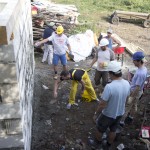 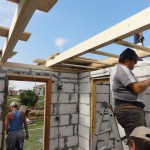 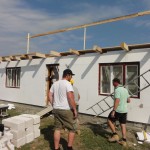 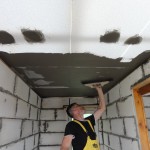 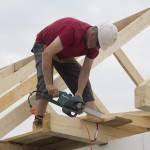 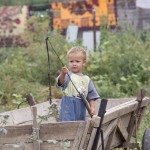 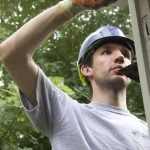 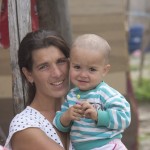 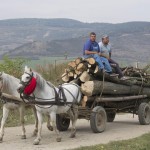 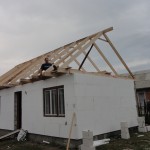